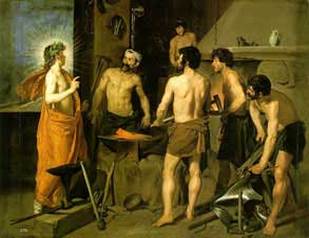 Because Zeus wanted Aphrodite to marriy him, but Aphrodite didn't want to marry him. Because of this, Zeus wanted to revenge her, so he let Aphrodite marry to Hephaestus, the god whom was crippled, and the god of fire. But Aphrodite didn't like him, she liked Ares, and she always dated with Ares. Finally, Hephaestus found out that, he found them were together on his bad. And he was sososo angry. So he invited Olympian gods and goddess to view this pair. And all of the gods and goddess were laughing at them.