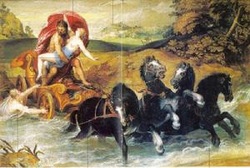 Demeter, the charger of crops, has a  beautiful daughter, Persephone. But, she was kidnapped by Hades. Because he  fell in love with her, Persephone had a bad time in the underworld. She barely  ate. Her mother was so sad that influenced the crops. Zeus was worried about it  and sent Hermes to negotiate with Hades. He agreed that Persephone would live  with him for 6 month of the year. But she should return each spring. At that  time, Demeter makes flowers bloom to welcome her.