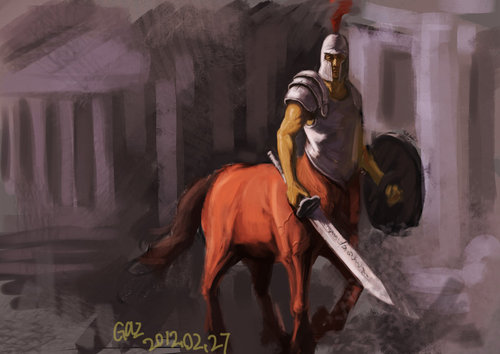 Chiron was a half man,half horse being known to the ancient,Greeks as a centaur .he was the son of the Titan Cronus, which made him one of the immortals .his mother rejected him, but Apollo,the god of poetry and music come to the rescue.Apollo adopted the infant Chiron and schooled him thoroughly in the arts,sciences and mysteries that he would need to rise above his beast nature.and he became a nealer,astrologer,prophet and teacher, he had many students.though he looked like the other centaurs in appearance, he was very different in his character. instead of the brutish and crude behavior that was so typical of his brethren, Chiron was a scholar and a gentleman.
Hercules during a centaur in the process of the robber killed his teacher chiron, use it is when the teacher give an arrow. The arrow across the body, one and a half men the robber shot behind Charon's throat. Chiron is immortality, but hercules arrows soak the hydra hydra poison blood, Charon's feel pain more than death. At that time, Prometheus stole skyfire because for human use, by Zeus is tied by torture in the Caucasus mountains, Charon's decision to own and exchange of Prometheus, give up once freed Prometheus and his eternal life, allowing both sides to relief. Zeus after rising in the sky, a Sagittarius.