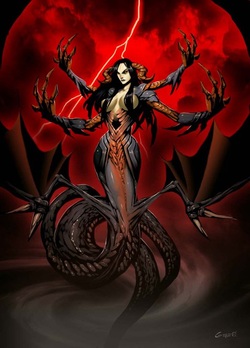 This monster is EKHIDNA (or Echidna) which  was a monstrous she-dragon with the head and breast of a woman. She probably represented or presided over the corruptions of the earth : rot, slime, fetid waters, illness and disease. She is a person that has a helf part is snack and the other part is a woman, she looks very evil. She has two wings and four hands. She use the way that snack use to walk.
She also like a python, a dragon born of the fetid slime left behind by the great deluge. She give birth a lot of moster, and she is the mother of monster. She also is a big monster calls Typhon's hideous mate. After they escaped destruction. She cowered in a cave, protecting Typhon's dreadful offspring, and Zeus let them live as a challenge to future heroes.
And also, she is the daughter of GAEA